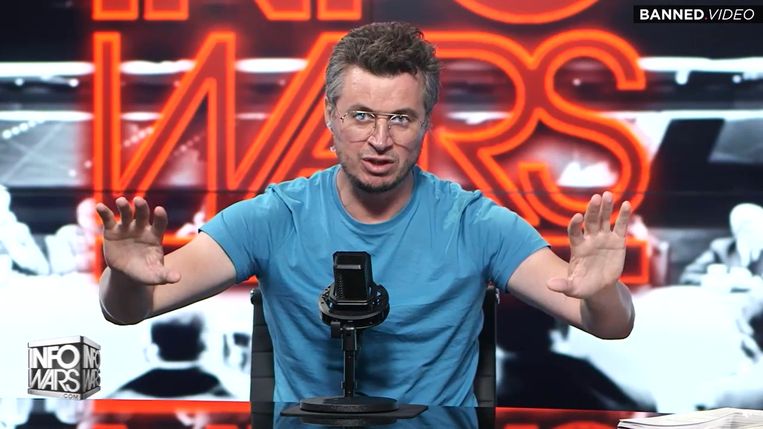 In response to his critics, Mattias Desmet wrote a long rebuttal in which the reader learns remarkably little about the nature of his opponents’ criticisms. It is one big litany about the great injustice done to Mattias Desmet by the established media, all of whom are allegedly involved in an orchestrated campaign against his person. All the critics, according to him, have nefarious intentions and are only out to silence Desmet. He does not acknowledge a single mistake or error.

Or at least only one very insignificant one in his own words: the case of open-heart surgery under hypnosis without local anesthesia. Surely here he had to admit that indeed he had not been physically present at such surgery, but had only seen a TV broadcast about it. In his piece, he referred to a VRT report from December 2019. However, if you open this link, you see that there was indeed local anesthesia (on Oct. 11, Desmet appeared to have tacitly replaced the link with a link to a 2003 article from Het Nieuwsblad about a urological procedure under hypnosis but without anesthesia).

It was an unintentional deception, he said. Which, moreover, he had immediately rectified on his private page on Facebook. Now immediately in this case is very relative, because he did that only on September 5, so 3 days after the broadcast of his interview with Alex Jones. On Sept. 3, however, skeptic Pepijn van Erp had already posted about it on Twitter. Pepijn van Erp had also asked him for a response on the same day, which unfortunately has not been forthcoming until today.

Desmet made it seem as if this statement had been something one-off, but he had previously made these statements to Tucker Carlson and in a conversation with Viruswaarheid frontman Willem Engel. So Desmet is being particularly creative with facts. He doesn’t really have a great affinity with facts either, it’s all more a matter of trust says our professor of clinical psychology.

What that means for his own theory he apparently does not realize because he unflinchingly repeats the same monotonous rants, interview after interview. As if he realizes that his theory is primarily based on the power of endless repetition of the same phrases over and over again, with the same tired examples, like a kind of mantra. To questions or remarks of his interlocutors he hardly reacts at all. He is completely in his own trance.

Earlier, together with Pepijn van Erp, I discussed at great length his book The Psychology of Totalitarianism, chapter by chapter. Desmet’s only reaction was: hahaha (on his own Facebook page). In what follows I would like to add a new paragraph. The way Desmet handles his source material, in this particular case the book The Dawn of Everything (2021) by David Graeber and David Wengrow. 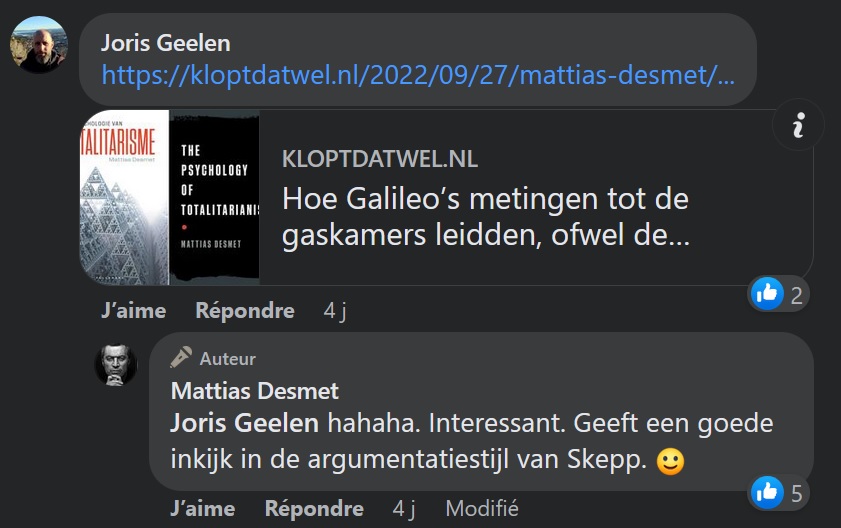 Desmet advises everyone to read the book, but turns out to be a careless, uncritical and very superficial reader himself. For example, he claims that the Wendat (in his text “Indian tribes in Northeast America“) lived in an egalitarian society. Something contradicted by Graeber and Wengrow, however: “[T]he Wendat – who might not seem egalitarian in anthropological terms, since they had formal political offices and a stratum of war captives whom the Jesuits, at least, referred to as ‘slaves’” (Graeber & Wengrow, p. 40). The presence of slaves also suggests that not everyone was allowed to participate in decisions at the meetings. Desmet also seems to completely ignore the fact that this society was constantly at war with the other tribes, especially the Iroquois. These conflicts were not resolved through talk, but were often very bloody and extremely brutal.

Another problem is that Desmet relies too much on secondary sources, as again with his recommended book by Graeber and Wengrow. If he had dug a little deeper, he would have realized that Adario’s speech which Graeber derives from the 1703 travel report of the French soldier and explorer Louis-Armand de Lahontan cannot be attributed (or at least only partially and then as a source of inspiration) to Kondiaronk due to the simple fact that the latter never visited Europe which is extensively recounted in Adario’s speech. Lahontan stayed in Canada from 1683 to 1693. He might have met Kondiaronk at a French fort in 1688 when war broke out yet again between the English and French and their native allies. Desmet wrote: “Indigenous orators such as Huron-Wendat Chief Kondiaronk were invited to Europe for a seat at the table so that nobility and clergy might enjoy their extraordinary rhetoric and reasoning.” But that is precisely what has not been documented anywhere. Surely a Huron visit to the court would not have gone unnoticed in the second half of the sixteenth century.

However, Graeber and Wengrow dismiss this discrepancy in Kondiaronk’s biography with the story of Adario in Lahontan’s book as unimportant and assign enormous weight to Lahontan’s text. Indeed, this writing is said to have introduced the ideal of equality into European culture. It would be the source from which all Enlightenment philosophers would have drawn. Something that specialists on the history of the Enlightenment like David A. Bell thought was rather exaggerated. Graeber and Wengrow (and Barbara Alice Mann quoted by them) invoke the authority of the Jesuit Pierre Charlevoix (History and General Description of New France, [1744] Volume 5, p. 146), but forget to mention that the latter did not arrive in Canada until 1705, four years after Kondiaronk’s death. So he must have heard about Kondiaronk’s oratorical talent from others. Most likely, Bacqueville de la Potherie’s 1722 work is one of Charlevoix’s sources.

Pierre Charlevoix’s view, moreover, contradicts that of Graeber and Wengrow on several important points. For example, Lahontan is said to have been completely unreliable and Kondiaronk, according to him, was a good Catholic. The identity of Adario (if not entirely a fictional character) is a source of much debate. Ultimately, it is about the interpretation of texts and how to situate them in their historical and political context. A contextualization that is entirely absent with Desmet. With him it becomes timeless and contextless clichés. It would be going too far to expound now on the complex political relationships of the situation and the political background of all protagonists here (it should be remembered that at the time information was at stake in a political struggle). It is certainly fascinating material that deserves further treatment, but I lack the time right now to go into it in depth. Incidentally, it would not be the first time Desmet has resorted to questionable literary sources. For example, he already uncritically copied a story by Henri David Thoreau in his book.

Professor Desmet thus continues in the same manner as before. It is to be feared that he will never seriously address any criticism whatsoever. He can only see criticism as an attack on his person. Nowhere does he show any critical self-reflection. Despite his many pious words about dialogue, debate and openness, the professor is extremely monomaniacal in his views and obsessed with being right. He displays increasingly guru-like traits.